April 30, 2018
There was a time when names had meaning. A time when people gave their kids certain names because of what the name meant, not just because they thought the name sounded good. In Genesis 17:4-5, God changed Abram's name to Abraham because he would be the father of many, exactly what the name means. In Judges 8, when the people ask Gideon to rule over them, Gideon refuses and says that God will rule over the people. Sounds noble enough, until we get to Judges 9 and find out that the name of his son was Abimelech, which means "my dad is king." Super classy, Gideon. My point is, there was a time when names meant something.

The name of God has meaning too. In Exodus 3, when God tells Moses he's sending him to convince the pharaoh to let the Israelites leave Egypt, Moses is concerned that the Israelites will wonder who gave Moses these instructions. God replies in Exodus 3:14, "I am who I am" (but it can also mean "I will be who I will be"). He goes on in the same verse to instruct Moses to tell the Israelites, "I am (or "I will be") has sent me to you."

Now let's think about that for a minute or 20. 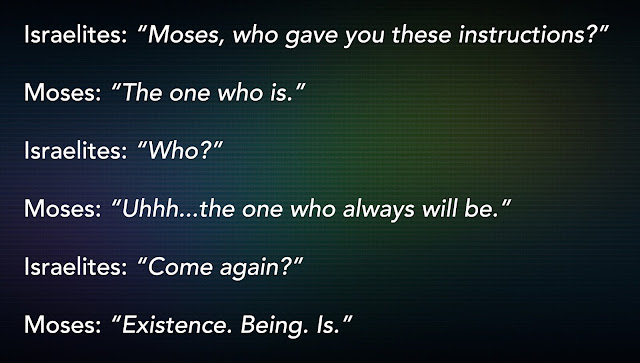 Kind of heavy, right? But then, as soon as we try to wrap our minds around that, in Exodus 3:15 God says, "Tell the Israelites, 'Yahweh... has sent me to you." This isn't exactly the same answer he gave in the previous verse. It's from the same root word, but he switches from 1st person (I am) to 3rd person (he is). This shouldn't trouble us. When God introduces himself to Moses, he uses 1st person. When other people are talking about him, they would naturally use 3rd person.

There may be something else going on here too. Hebrew does this interesting thing where they add some letters at the beginning of a word to change it from normal to causative (there's more to it than that, but you get the idea). In other words, the verb "to fall" becomes "to cause to fall" (to trip, push, etc.) just by making a few changes at the start of the word. Some have suggested that might be what's going on here, that God's name is a causative form. So God's name may not simply mean "to be" but rather "to cause to be." A pretty good name for the creator of everything.