Friday Film: The Book Of Eli

June 22, 2018
I'm usually selective about the films I watch. I rarely just watch a movie on a whim. But a while back, that's how I watched The Book Of Eli. On a whim. And it was a great surprise. 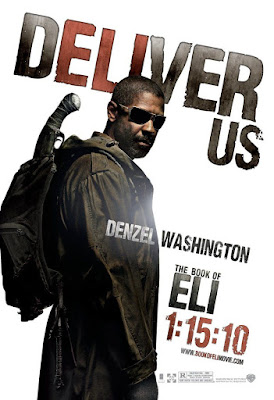 This movie has a lot of really good things going for it. There's a killer cast, with Denzel Washington as Eli. The first song in the movie is an old Al Green tune (please don't talk to me about the Bee Gees). And get this, Tom Waits has a cameo! Are you kidding me? What's not to like?


Early in the movie, you realize it's different than a lot of films. Eli prays to God before his meals. He teaches others to pray. Eli likes to quote the Bible (and Johnny Cash). Once, before beating down a gang of bad guys, he quotes from Genesis 3:17-19:


Cursed be the ground for our sake...
Both thorns and thistles it shall bring forth for us...
For out of the ground we were taken, for dust we are and to the dust we shall return.

And then he promptly returns the bad guys to the dust.

Just look at the promo poster above. The release date of the film using colons, like a reference to a chapter and verse from the Bible. And the words "Deliver us." There were others too. 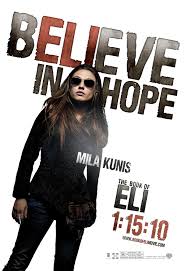 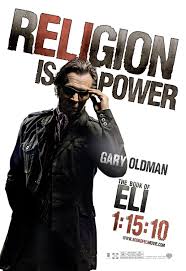 Here's a synopsis. I'll try not to spoil it for you if you haven't watched it.

It's been 30 years since some sort of nuclear event, so this film looks a lot like Madd Maxx and the like. Eli is traveling across the country, trying to get to the west coast. Along the way he hunts small animals to survive, gathers goods from all that remains (which isn't much), trades for water and other needs, and "interacts" with violent gangs along the way. Turns out Eli has a book, a prized commodity in this post-nuclear apocalypse, and it's the reason he's traveling west. We soon find out it's not just any book. It's a Bible. After the war, Bibles were destroyed and he has the only one left. A "voice" led him to where he found the Bible under some rubble. Reminds me of how the court of King Josiah found the Book of the Law when they were pulling a Fixer Upper on the temple after it had fallen into disrepair. Check out 2 Kings 22 for that story. The voice told Eli to take the Bible west to a safe place and that he would be protected along the way.

Eli runs into complications along the way, namely Carnegie, played by Gary Oldman. Carnegie (great name) reigns supreme over a small town, and intends to build more towns and control more people. For Carnegie, the best way to do this is through religion and that's why he wants Eli's Bible.

There's much more to this film, all of it leading to a powerful, memorable ending. If you've watched it already, you know what I mean.

But let me share something the movie didn't tell you. Do you know what Eli means? It's Hebrew. It means "my God." Yep. The name of the movie is The Book Of My God.

FYI, it's rated R for "some brutal violence and language." Check out the parents guide on IMDB if you want more details.