But the differences are about so much more than what stories were included or left out. Luke gives emphasis to a couple of things that the other gospels don't. Important things. Things like the Holy Spirit. The title "Holy Spirit" is only used five times in Matthew. Mark is even less interested, with only four mentions. To their credit, Matthew and Mark still talk about the Holy Spirit more than a lot of American churches.


Luke kicks it up a notch though, using the title "Holy Spirit" nine times in the first four chapters alone! Nine times! But this shouldn't surprise us. You see, nearly all biblical scholars understand the gospel of Luke as volume one of a two volume work that concludes with the book of Acts, a book about the early history of the Church. And guess what happens in Acts? The Holy Spirit is everywhere, including ten times in the first four chapters alone and a whole bunch more after that. Luke wants his readers to know that the Spirit of God was deeply embedded in the earliest parts of the Jesus story and in the earliest parts of the story of the Church.

Luke has another important emphasis as well. Any guesses? It might not be what you would expect. The gospel of Luke, more than any other gospel, isn't afraid to focus on the role of women in the life, death, and ministry of Jesus.

Okay, let's pause for a minute. We live in an age when victimized women are finding strength to take a stand and their abusers are being held accountable for their actions. But that's not why I'm mentioning this. I've been making this observation about Luke in college classrooms for years, and this observation didn't begin with me. I don't teach this material because of its current cultural relevance, I teach this material because it is fact. And the fact is, women play both a quantitative and qualitative role in Luke, more so than in Matthew, Mark, and John.

From the start of Luke, women are everywhere. There are 13 women in Luke that aren't mentioned in the other gospels.

We already mentioned how Luke focuses on Mary, the mother of Jesus, in the birth story. But Mary isn't even the first pregnant woman in Luke's gospel. Elizabeth becomes pregnant with John in the very first chapter! This story only shows up in Luke.

In Luke 2, a prophet named Anna spoke to anyone who would listen about the child Jesus when he was presented at the temple. This story only shows up in Luke. 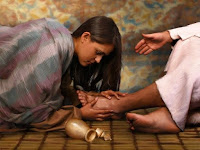 In Luke 7, a woman anoints Jesus' feet with ointment and her tears. This story only shows up in Luke. Yes, Matthew, Mark, and John include a similar story but it's not the same. Different woman, different location, and other distinct details.

In Luke 10, Mary sits at the feet of Jesus and listens to his teaching, rather than focusing on household tasks, choosing what Jesus called, "the better thing." This story only shows up in Luke.

There are more, but you get the idea. Luke also likes to pair stories of men with stories of women.

In Luke 7, the healing of a centurion's slave is immediately followed by the resurrection of a widow's son.

In Luke 10, the parable of the good Samaritan is immediately followed by the story of Jesus at the home of Mary and Martha.

This may not seem like a big deal, but you don't find these sorts of pairings in Matthew, Mark, and John. What a guy, that Luke. Practicing gender equality in the 1st century AD.

My favorite text about women in Luke is found in Luke 8:1-3. Luke tells us that Jesus is taking his ministry throughout numerous cities and villages. The twelve disciples are with him, along with "some women who had been healed of evil spirits and diseases: Mary, called Magdalene, from whom seven demons had come out, Joanna, wife of Cuza, Herod's steward, and Susanna and many others who were helping to support them (masculine plural in the Greek) from their (feminine plural in the Greek) own means." 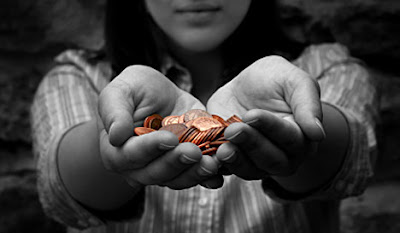 Yep. Women who had been healed of evil spirits and diseases were traveling with Jesus along with the disciples and were financially supporting the ministry. I mean, haven't you ever wondered how this gang did the whole Jesus thing for three years? Who was footing the bill for this? Tax collectors and fishermen walked away from their day to day lives to follow him around for three years. Who was picking up the tab? A group of women played no small role in doing just that. If it wasn't for Luke, we would never have known. Nicely done, Luke.